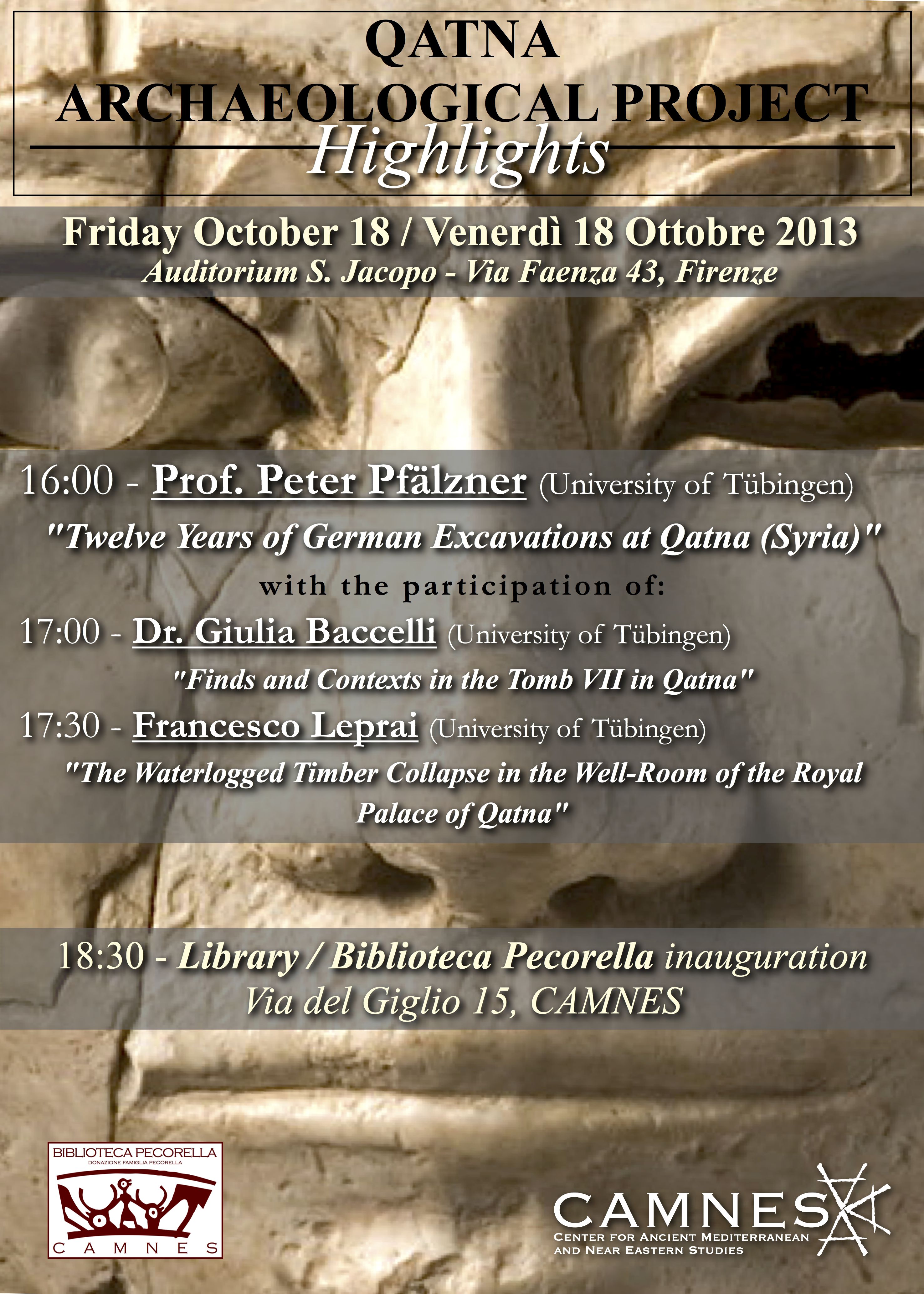 In the Middle Bronze Age, Qatna was one of the most important centres on the coastlands of the east Mediterranean. It lay on a tributary to the river Orontes, 90km from the Mediterranean, and thus on an important crossroads: east to west from Mesopotamia to the Mediterranean, and south to north – from Egypt, into Palestine and up to Anatolia (modern Turkey) home of the Hittites. It reached its height in the middle Bronze Age, in the 18th to 17th centuries BC, when Qatna, together with Aleppo, were the two most important kingdoms in Western Syria. From the 16th -14th centuries it was a vassal of the Mitanni Empire, and it was destroyed – most probably – by the Hittites in 1340. There was also an extensive later Iron Age occupation on top. Today, it lies 20 km NE of the modern town of Homs, and is being excavated since 1999, by three teams, a German team from Tübingen led by Peter Pfälzner, a Syrian team from Damascus led by Michel Maqdissi, and an Italian team from Udine led by Daniele Morandi Bonacossi.


The palace
The palace dominates the surface of the site, measuring some 120m from east to west. It was entered from the west, from whence one went into the largest room: the Audience Hall. This then led through into two halls, the first of which was the Throne Room where the King held his receptions, while the second was devoted to cult and ceremonial. However, there was one very anomalous feature, a long corridor which led north from the ceremonial hall right through the centre of the palace towards the northern walls. It led down a series of mud-brick steps that had been covered by wooden beams. At the bottom of the steps, half way along the passage was a secure doorway with a double framework anchored firmly into the wall; so the corridor could be firmly blocked off.

On the floor of the passage, archaeologists made the first big discovery: the floor above had collapsed, and 73 cuneiform tablets had fallen through from above. The passage was continuously sloping down and had cut through the earlier mud-brick layers into the natural terrace below. The passage stopped at the outer terrace wall of the palace so it was not an exit, but led to something inside the palace. At the end of the 40m long passage, archaeologists discovered a way off to the right, which opened into a deep shaft, 5 metres down: there was no sign of any staircase leading down into it, so it must have been entered by a ladder.


The underground shaft
To one side of the shaft was a wall cut into the bedrock with a blocked entrance in the middle of it. On either side of the door were two identical statues, both in their original positions: one to the right and one to the left.

They were both made of basalt and though the head of one was broken, both were in otherwise excellent condition. They were seated statues in the old Syrian style of the Middle Bronze Age, the heads carefully carved, the eyes inlaid with limestone. There was a binding round the hair so that the hair appeared as two braids, one below, one above the binding, a very typical headdress for the period of the 18th or the 17th centuries – compare the similar headdress of the so-called head of Yarim-Lim, found at Tell Atchana/ Alalakh.

Between the statues, we discovered the entrance to the grave. It had not been formally blocked, but was filled with debris. The tomb was unlooted, just as it had been left when the palace was finally captured and abandoned.


The royal tomb
The main form of the tomb was constitutes by a central chamber and three side chambers. The main chamber was the most important: this is where most of the burials were made, and this is where the main ceremonies were performed, and where above all, the feasting took place. To one side was a basalt sarcophagus with no lid. It contained the remains of three individuals, none of them complete, whose bones had all been taken from a primary resting place and redeposited here. Four other burials, perhaps the most recent, were represented by traces of four wooden biers. The wood had all rotted away but they were still outlined on the floor. Bones still remained on the biers but they were partially disarticulated. The bodies had clearly been put in fully dressed, for there were hundreds of gold and glass beads. Archaeologists also found spear heads, a golden hand, and a lion head made of resin that had presumably served as a toilet box.

But the main function of the room was feasting. Around the south and western walls there were stone benches. Under and on these were numerous pots, both storage jars and bowls: the food was presumably brought down into the chamber to be stored in the jars, and then eaten from the bowls. Other benches were free from objects and may have been used specifically as seats. Beneath these benches were animal bones, as if the feasters, having enjoyed their feast, then stuffed the bones under the seat. Such memorial feasts, called kispum, are known from literature. There were also some Egyptian objects including a calcite vessel with an inscription of the 18th dynasty (1550 – 1295).

The chambers to each side of the main chamber performed different functions. The largest chamber was the southern one, lying directly opposite the entrance. It had a wooden floor and a wooden bench on the far side – it had collapsed long ago but is visible as a darker coloured trace upon the ground. Within this chamber no human bones were found, suggesting that it was not a burial room. But there were offering bowls at the foot of the bench and symbolic food offerings – probably meant to be presented to the dead king. This chamber may well have been regarded as the banqueting room of the dead king. It contained two serpentine vessels made in Egypt in the 12th dynasty, at around 1900-1800 BC, which were thus clearly heirlooms, 500 years old at the time of burial. The primary burials were made in the western chamber, which proved to be the most astonishing of the side rooms. To the right was a stone bench with a skeleton in anatomically correct form laid out on it, the only complete skeleton in the whole tomb: this was presumably the most recent burial, the only one that had not been moved.

However, what is most remarkable – although not yet definitely proven – is that the bodies had probably been heated to around 200 degrees. Was this done for preservation, for sterilisation, or for smell reduction? The body had subsequently been fully clothed or covered by textiles which remained, though very fragile. A stereo microscope was brought into the tomb so that the remains could be examined in situ before they powdered away. It could be seen that there were several different cloths in different layers which had been dyed in different colours. The body had been placed in a wooden box which had all decayed away apart from the bronze clamps at the corners. Round the waist of the body was a well preserved gold belt where the gold thread on which the beads were strung had still survived unbroken, so that we could see how the beads of gold, carnelian, amethyst and glass had been arranged. There was also a second sarcophagus which, as with the first one, was without a lid. It contained remains of two bodies, numerous pottery vessels and a gold bowl.

The eastern chamber was left to last. This was clearly the ossuary, for it contained a thick layer of animal and human bones marking a long period of deposition and the final resting place of the bodies; when they were cleared out of all the other chambers they were deposited here. The presence of numerous offering bowls even here, indicating that the older bodies also had food offerings with them.

Thus the full procedure can now be worked out. When a king died, his body – according to our preliminary analysis – was first heated. Presumably this took place outside – perhaps as a public ritual. Some may also have died away from home and were heated to protect the body for the journey back to Qatna. The body was then brought into the tomb, and deposited in its primary resting place, for example in the western chamber. In the secondary burial the decayed bodies were transferred to the sarcophagi, where they too could enjoy the offerings and the funeral feasts. Finally, in the tertiary burial, the oldest burials were removed into the ossuary and offerings were presented to them continuously. Many generations were thus brought together in tombs, dining together, with the living sitting on their benches, and the dead lying on their biers and in their sarcophagi.

The well-preserved 3000 year-old élite tomb has revealed a long sequence in which the dead and the living feasted together for a long time. Then, finally, the dead were laid to rest in an ossuary.


For further information on the Archaeological Project please visit qatna.org