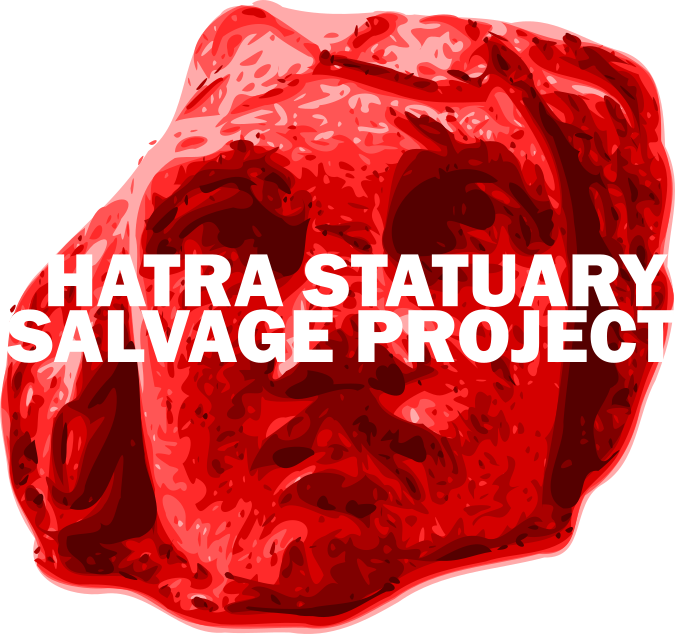 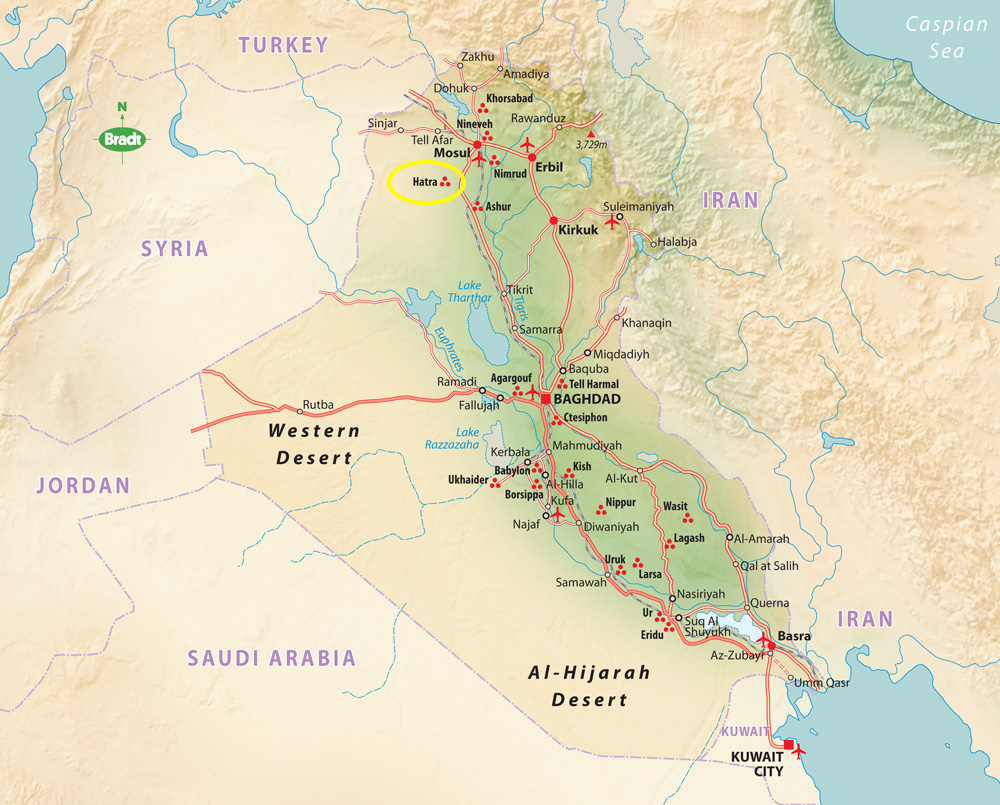 Hatra was a walled Arab city in northern Mesopotamia with extraordinarily well-preserved monuments dating from the 2nd and 3rd centuries AD. As an important Arab sanctuary and a major city of the Jazira , a buffer State between the Roman and the Parthian empires, it stood at the crossroads where the main trade routes met. Besieged without success by the Roman emperors Trajan and Septimius Severus and eventually captured by the Sasanian king Shapur I, it was abandoned around 240 AD. Since the middle of the 19th century, the ruins of the city of Hatra have been mentioned and recorded by travelers and scholars. Iraqi teams excavated in Hatra since the 1950's and implemented major restoration works. In 1985, Hatra was the first Iraqi site nominated on the UNESCO World Heritage list. The significance of Hatra as a bridge between East and West is an evidence for all to see, not exclusively for those who are specialized in the study of Parthia, of its history and its culture. The sculptures discovered at Hatra are the largest and most important corpus of Parthian sculptures known. This assemblage is preserved mainly in the Iraq Museum in Baghdad and few statues in local museums in other cities of Iraq. The statues represent kings, aristocrats, priests and gods, showing the complex social, cultural and religious system of Hatra.
An Italian Archaeological Expedition directed by Roberta Venco Ricciardi stared to work at the site since 1986, focusing on the important sacred  enclosure at the centre of the city (the so-called Great Temenos) and on a large private residential building located along the North Street (Building A). 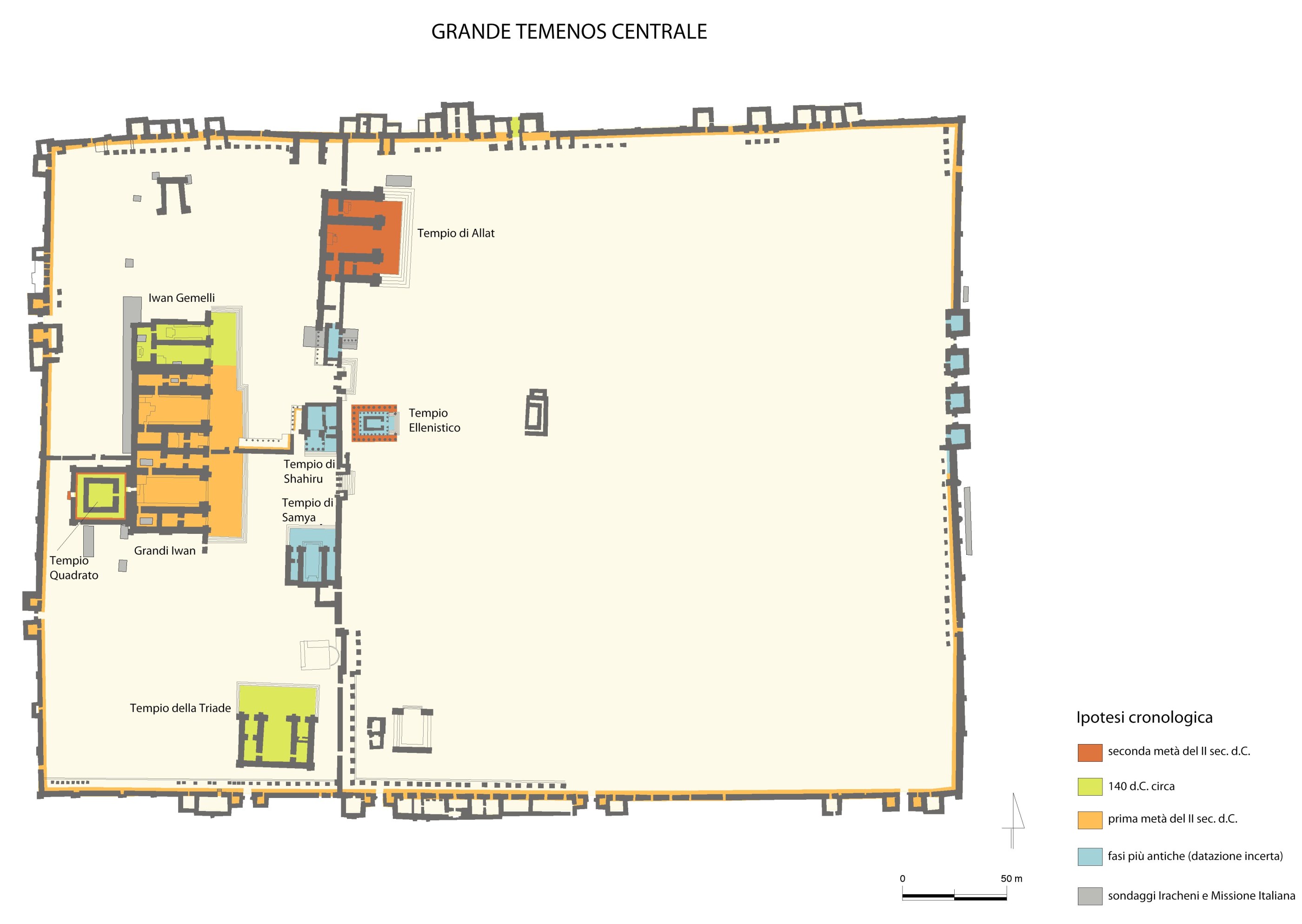 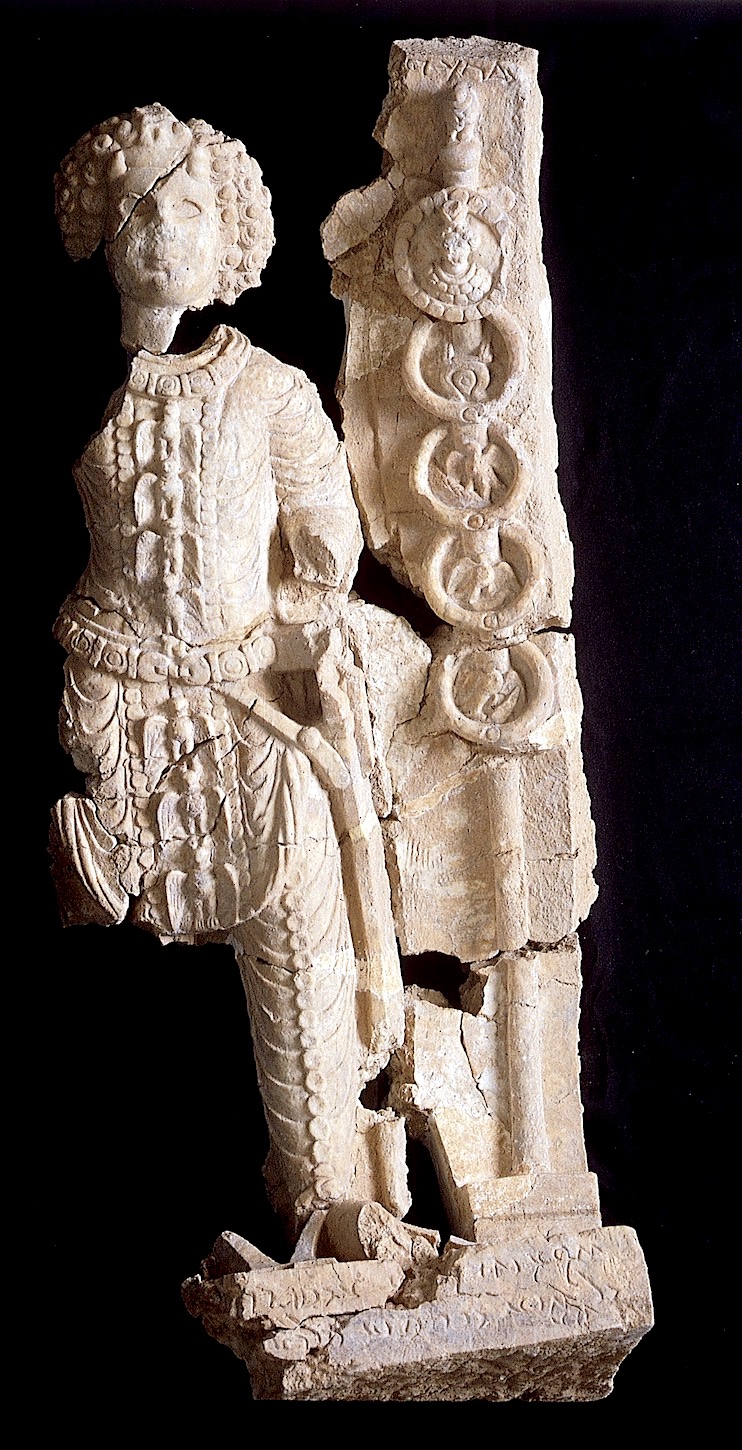 The corpus of the Hatra statuary is the most extensive and representative for the art of the Parthian Period. In 2004, the Centro Scavi di Torino (CRAST), was in Baghdad to work with the Iraqi heritage authorities in view of the reopening of the Iraq Museum. During two months, the Italian researchers worked together with their Iraqi colleagues documenting Hatra statuary. The documentation produced (forms and photographs) was provided to the State Board of Antiquities and Heritage (SBAH) at the end of this work phase. In the same year, the Italian government worked in cooperation with SBAH to open a new fully functional restoration laboratory. Several Hatra statues were chosen for the training activities of the new staff of Iraqi restorers. The engagement continued in July 2013, when after few meetings held at the SBAH offices with the Senior Advisor of the Iraqi Ministry of Tourism and Antiquities and the then Director General of the Iraqi Museums, it was agreed to start the procedures to establish a cooperation with the Iraq Museum for the documentation, storing, preservation and exhibit of the Hatra statuary. Unfortunately the project could not be implemented at the time due to financial restrinctions. 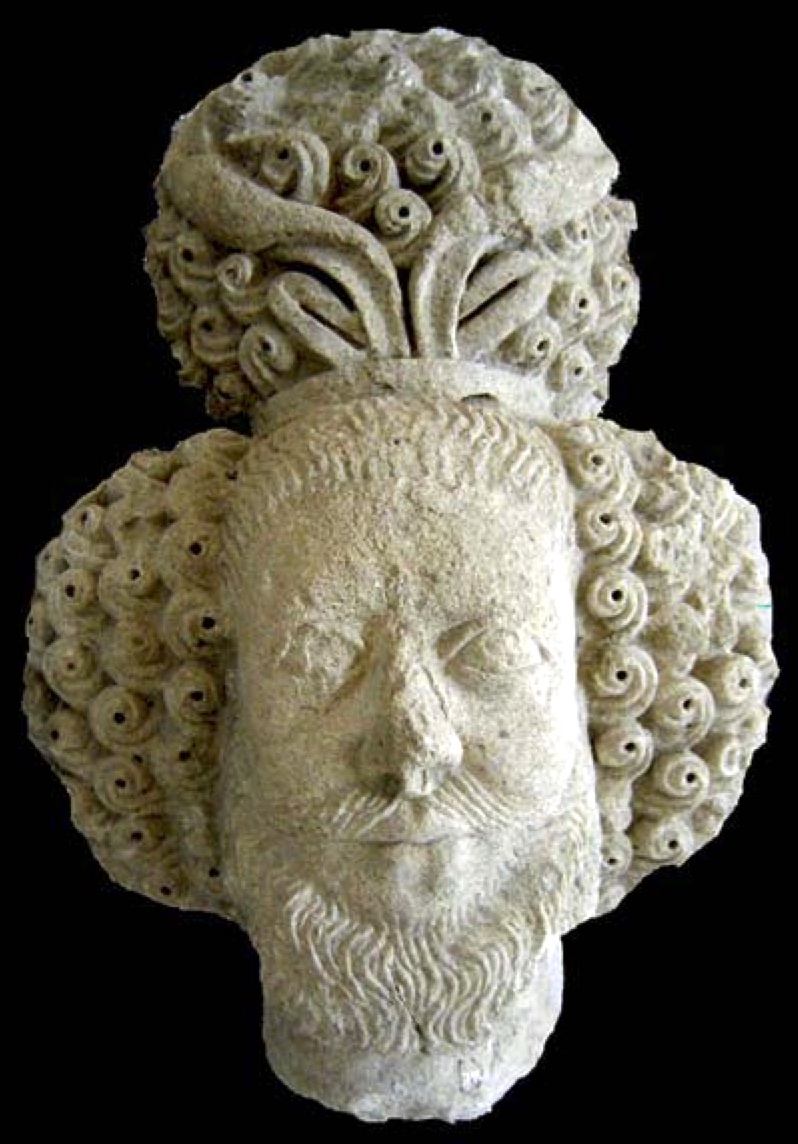 The Hatra's statuary at the Iraq Museum in Baghdad
In the Iraq Museum, in both the galleries and the storerooms, there is a great number of sculptures from Hatra. Many of these are in fragments of different dimensions. In various cases, fragments of the same statues are kept, due to limited storing space, in different rooms. In 2004, it was possible to gather fragments belonging to the same statues but many of them still need to be identified and reunited.

Outcomes and methodology of the proposed project

The main purpose of the project is to create a comprehensive database of both the complete statues and the fragments in order to classify and, when possible, attribute them to individual items in view of their completion and restoration. In order to achieve a thorough assessment of the materials, it will also be necessary to review the old Iraqi archives, starting from the excavation registers, and to understand what is kept in Baghdad and what might be in other provincial museums or still at the site. The registers and the graphic documentation should also be scanned. The project will be developed as an on-the-job training and capacity building for the staff of the Iraq Museum in museum cataloguing and storing procedures. A senior conservator and/or restorer from the Iraq Museum should be assigned to coordinate the local team. Especially after the tragic events at the Mosul Museum and at the site, the outputs of this catalogue will be that to have a complete database of the Hatra's statuary corpus fundamental for its management, conservation and protection, later disposals in the museum for permanent or temporary exhibition, and for study purposes. A catalogue of the statuary will be published at the end of the project and panels and exhibitions of statues in Iraq (Iraq Museum) and in other countries will be scheduled to spread the results. Weekly reports of each part of the project will be accounted on the website of the Italian Expedition and on social networks, in order to involve the public in the different stages of an heritage and cultural project in complex areas as the Near East.

Project schedule
The preliminary mission of few days to evaluate the disposal of the Hatra collection in the stores of the Iraq Museum in Baghdad was completed in October 2019. Several meetings with the Iraq Museum and SBAH colleagues were held in order to prepare the main phase of the project.

A preliminary re-organisation of the items from Hatra in the storerooms of the museum was planned to ease the successive works at Baghdad. The purpose of the main project phase (scheduled for December 2019 and January 2020) is to finalize the comprehensive electronic database started in 2004 of all the Hatra statues and their fragments, recording the following information: progressive number, picture, description, measures, material, previous restorations, register numbers (Excavation and Museums numbers), find-spot, list of old images kept at the SBAH photo archive, assessment of conditions, threats, recommendations for conservation and bibliography. This phase will be fundamental in the perspective of assisting in the management and preservation of the Hatra statuary collection. It will require approximatively forty-five days of work with three members of the Italian team in Baghdad at the Iraq Museum and four Iraq Museum curators. The non-exposed statues and fragments will be arranged on dedicated metallic shelters (already installed) placed in the storerooms.

The re-assemblage of the statues will be decided with the local restorers and the work will be accomplished in the restauration laboratory of the Iraq Museum. The newly restored items will be later available for exhibition in the Iraq Museum halls. This project can be intended as a starting point for a new organization of the statuary exhibited in the halls devoted to Hatra at the Iraq Museum with new panels and an innovative interpretation, which will allow a more comprehensice understanding of this important ancient city for the local Iraqi community.

Another outcome of the project will be the availability of a complete catalogue for the Hatra statuary preserved in the Iraq Museum. 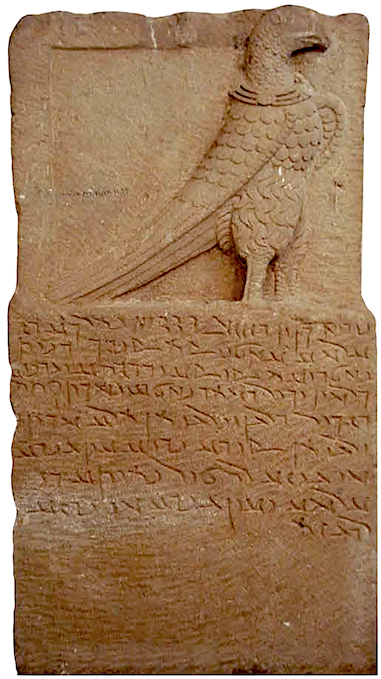 - Roberta Venco Ricciardi (Director of the Italian Archaeological Expedition at Hatra since 1986) is a former professor of archaeology at the University of Torino, focusing on the Parthian and Sasanian periods. During the expeditions at Hatra, she has trained local archaeologists and SBAH staff members, sharing with them her deep knowledge about the culture of Hatra. In recent years, she has taken part to several conferences and workshops about cultural heritage in danger and she is considered one of the most important researcher on Hatra topics. She is the director of the project.

- Alessandra Peruzzetto (member of the Italian Archaeological Expedition). She joined the World Monument Found in 2006 and is responsible for a wide range of project activities, from conservation to capacity building and site management, particularly focused on the ancient world and the Middle East. She manages mainly the relation with the SBAH staff.

- Enrico Foietta obtained his PhD in archaeology at the University of Torino with a thesis on the landscape and urbanism of Hatra. He has published a book and several papers on the architecture and items discovered at the site. He has taken part to several archaeological expeditions in the Near East. He manages the website and social media of the Italian Archaeological Expedition at Hatra (https://hatrasite.com).

- llaria Bucci is a PhD student in archaeology at the Birkbeck College (University of London). She has written a MA thesis and several papers on the graffiti of Hatra. She has taken part to several archaeological expeditions in the Near East and has experience in database programs, which are employed in building a new form for cataloguing the statues.

The Project in Italian media 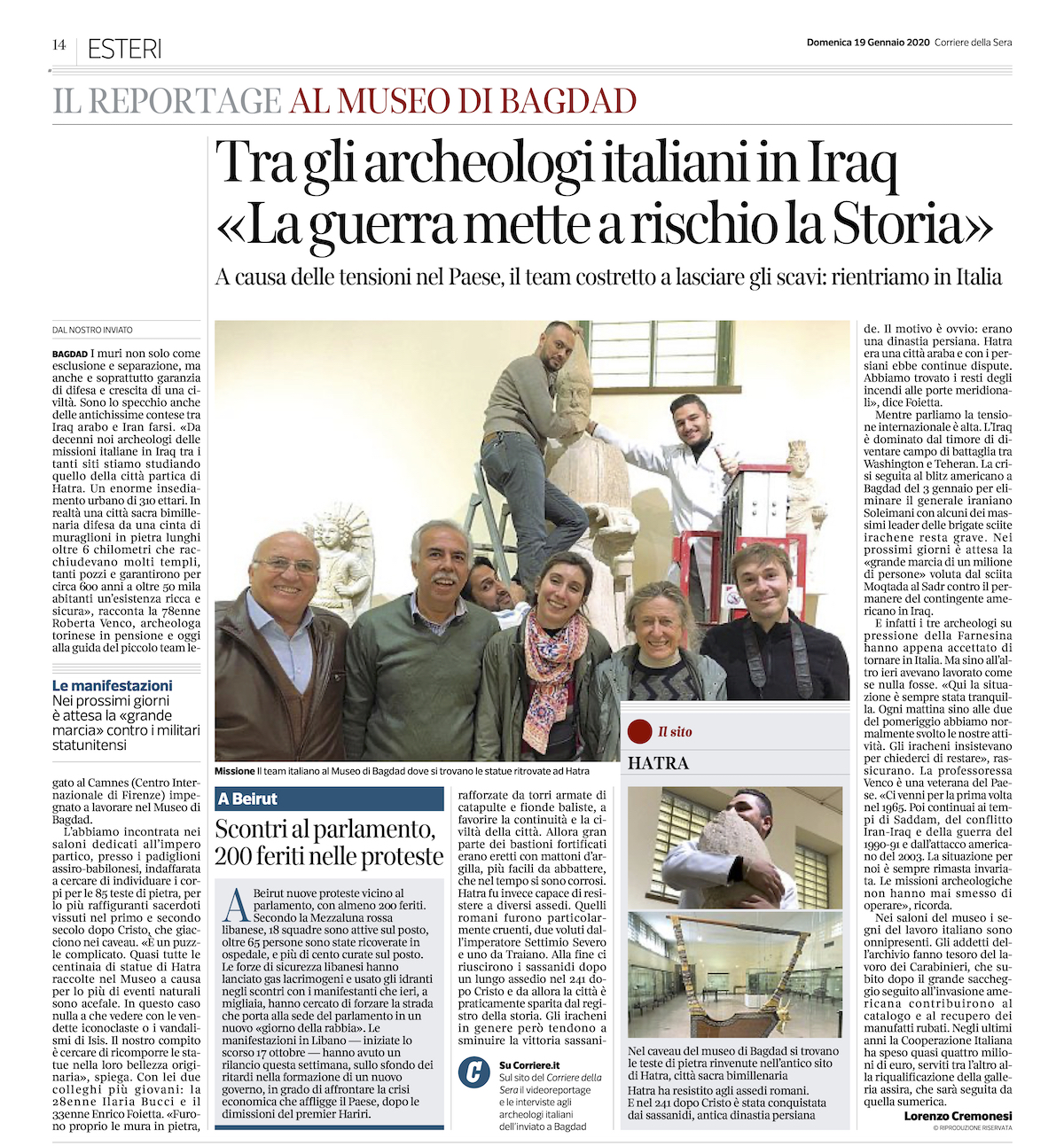 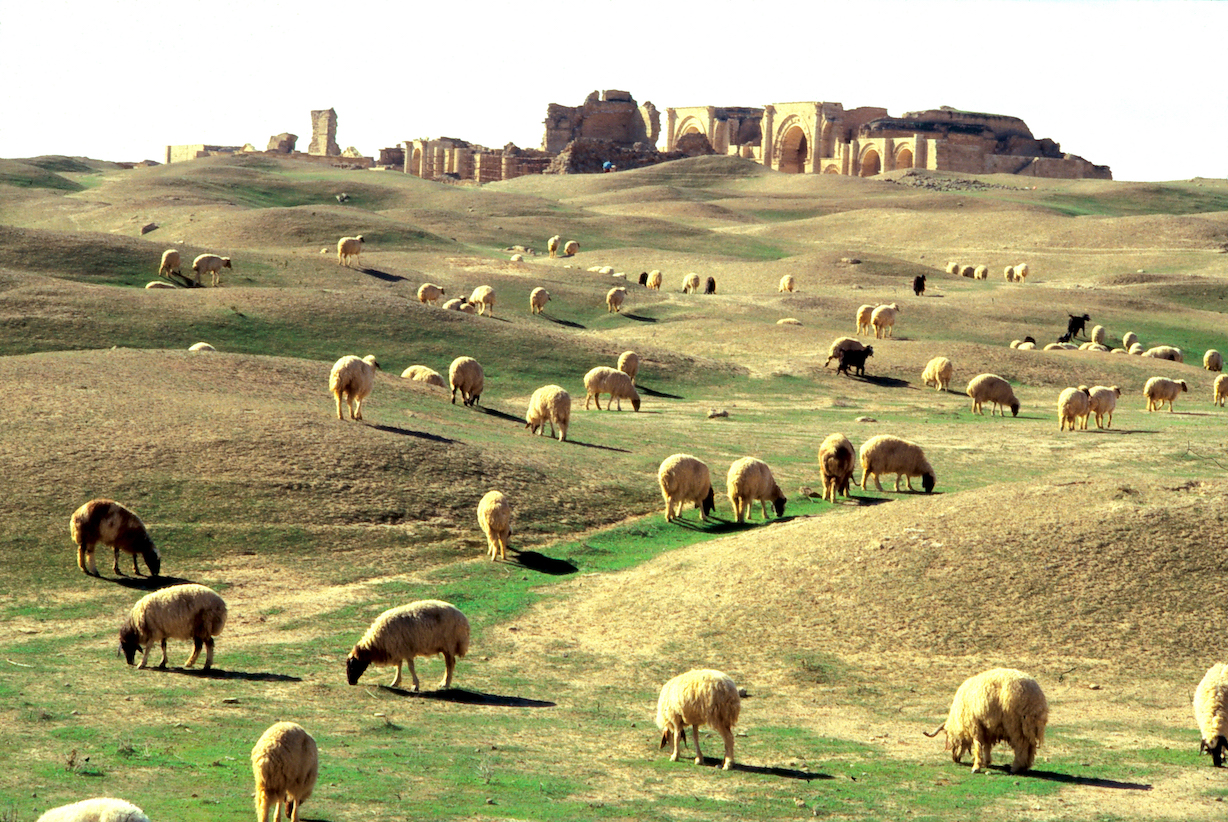